Welcome to my Sheena, Queen of the Jungle Fan Page

Sheena, unlike Wonderwoman (created to target young girls as the main audience), had a target audience of young boys. Wearing only the smallest fur and leopard costumes, this blonde heroin swung into the hearts and minds of young boys that came back monthly for another issue. In the comics, Sheena was always the strongest character rescuing her useless male companion Bob Reynolds from whomever had caught and tied him up that month. The villains ranged from slave traders to Nazis. She was a very tough hero able to take on crocodiles, gorillas, lions and natives. Her knife was her weapon of choice and she was known for corny one-liners in broken english like " My knife is swifter than your claws, killer ". Sheena's popularity climbed beyond the comic medium and into several pulp magazines and a short lived television series starring Irish McCalla. To see several stills from the TV series visit my Sheena TV show page here. In the early '80's, scream queen and Charlie's Angel Tanya Roberts starred in a the movie version produced by Columbia Pictures. On her zebra she and Vic(Ted Wass) try to save Africa. The movie is very camp and a lot of fun if you get a chance to see it. You will find some pictures and information on the movie on my Sheena Movie page.

The most recent addition to the Sheena web page is some original Fiction House Sheena art from Jumbo 71. I have set up a page to better illustrate the details of my favorite piece of Sheenadom, enjoy!.  Also recently added a number of other Sheena and Jumbo pages.  To see all my jungle girl art, click here.

I don't think the full impact of Sheena on the baby boom generation and popular culture could ever be quantified. Comics with Sheena are hard to find at local comic stores, but can readily be had at Comic conventions. Along the same lines, I have a Jungle Girls Page with more Jungle girls from the 1950's and a Fiction House page as a tribute to the greatest Good Girl comic publisher.

For more info on Sheena, I have recently added an interview with the creator Jerry Iger discussing the myth of Sheena. Look for interviews with Irish McCalla and Tanya Roberts on their respective pages in the near future.

Join the jungle girls discussion group at egroups I have just set up. There will be regular posts and discussions. Over 1100 members already.   To join click or go to http://groups.yahoo.com/group/jungle_girls/

Below are several pictures of various covers of Sheena appearances as well as a few scans from inside the books.

Sheena Essay - an informative and somewhat pretentious essay on Sheena, both Irish McCalla and the comic.

Fiasco's Good Girl Page Has some information on Sheena and other Jungle Girls. A commercial site aimed at selling reprints. An affordable way to get introduced to Golden Age comics in this genre.

Ken PeirceHas information on Sheena and other Golden age books. A great site for the enthusiast.

Will Eisner a site and discussion group specifically on Will Eisner art and stories. Including Sheena. Will Eisner actually interacts with site and answers questions. To quote a very forgettable American movie - "we are not worthy"(said as we kneel and bow to the god of comics).

Jungle Girl Tree House not exclusively Sheena, but some TV and Movie pics as well as other Jungle Girl pictures.

I will try and get some more info and pics in the future. If you have any images or have a copy of the old TV show, please e-mail. Much of the above information was from the World Encyclopedia of Comics edited by Maurice Horn, 1976. 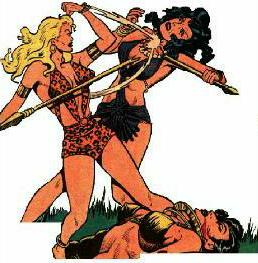